I’m writing this book review in English, because there are some english-speaking folks I want to recommend the book to.

Scotsman Ian Rankin writes crime novels, and has been doing so for over two decades. His main work is a series of novels about John Rebus, a rather washed-up Edinburgh police detetive who, there are no nicer words to describe it, is an alcoholic. Now, his new series is coming along, starting with The Complaints.

Personally, I, as a German (Bavarian, actually), like reading books in English for two main reasons: If the book was originally written in English, I want to read the original version, because then I can enter the exact world the author describes. If I read a translated version, I feel blind, with someone trying to describe what’s around us as we stumble through the story. Now and then obvious translation errors spoil all the fun, usually false friends like „you must not“, which rather often gets translated into the German equivalent of „you may or may not“. The second reason is simply that I can keep up my own English. Back to the chase:

I met John Rebus when I was going for a long train ride from Munich to Hamburg and desperately needed something to read. The bookstore clerk advised on Tooth and Nail, which I bought. The minute I found out it wasn’t part one, I put it down, but a few weeks later read it anyway. I liked the story, I liked the Edinburgh setting, I liked the finely crafted characters, and since I connect very well to Ireland, which in some aspects is quite similar to Scotland (as opposed to, say, India or France compared to Scotland), I got the other Rebus novels as well. It took me the better part of a year to read them all back to back and with nothing else inbetween. For me, the Rebus stories and the writing style just clicked.

Now Ian Rankin has put his workhorse into its well-earned retirement (I severely doubt many real coppers catch that many murderers in their career) and now has come up with a new man, and a new series, also set in Edinburgh: Enter Malcolm Fox in The Complaints.

The Complaints is an internal police department. It deals with complaints against policemen, ranging from cop neighbours who play their music too loud up to those who take bribes or go vigilante. Since most policemen feel like belonging to a big family, those officers who work against that family, like a undercurrent, are not welcome indeed.

This setting is fabulous, because it gives the author endless possibilities for antagonists as well as secret friends everywhere, also the character in that situation is easier to break, be broken, be put through the grinder, and also more likely to have some skeletons in the closet himself. The facettes of Malcolm Fox seem to create themselves just by that setting. (Which is not true, I’m pretty sure it’s extremely hard to construct a setting where all pieces fit together.)

On the other hand, Fox has quite big shoes to fill: Everyone who went along the ride with John Rebus now expects the new man to fill the gap right from the start. And that cannot be accomplished.

Thus, Malcolm Fox has to fight for his own place in the reader’s heart, a place on the side of John Rebus, and he has to fight hard. (I think an author can never prevent that his characters are compared to each other, no matter how much devotion and energy goes into creating new settings. It’s in vein, like desperately trying not to compare Han Solo to Indiana Jones.)

Roughly the first half of the story revolves around getting to know the characters, mainly Malcolm and another cop, whose name I will not mention for spoiling reasons. Malcolm Fox has a sister, Jude, whose partner got murdered under suspicious circumstances. But this is not Fox’s case, he’s just affected privately. Fox himself is investigating a policeman who leads a double life, with very criminal online activities. So the man carries a double load, of which neither Jude nor their ailing father in his nursing home should be affected. 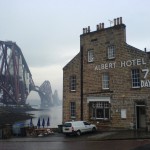 As always, Rankin takes us around Edinburgh, a city I’ve had exactly one evening and one day to discover five years ago. It’s not a touristy tour with much show value, but rather the filth and felt (as we say for sleaze in Germany) of the city. The characters we meet are well-etched, and it takes the author just a few words to convey whole life stories into a single observation – exactly the quality so desperately wanted in screenwriting.

So, Fox moves about, gets himself into trouble, and – it wouldn’t be a Rankin crime novel otherwise – gets suspended, gets beaten up, beats up – in short: breaks the rules but stands his ground against all odds; and more often than not gets sorely tempted by the (truly fabulous) Whiskys they serve up there, which is hard for an ex-alcoholic. Fox used to be married, but was so only for a short while, and didn’t generally have much luck with women anyway. I personally liked the man from the moment I read that sentence. (It’s the little things that lets us connect to the characters in the books we like.) Fox is very likeable in a book-typical way: As long as he’s safely between the two covers you can always shut, you can live with him. Were he your neighbor, you’d think about moving sooner or later, what with the folks coming and going at the most peculiar hours.

To get to the point: The Complaints is a fine crime novel, routinely crafted by an experienced crime author. If you know the Rebus books, maybe even all seventeen, give the Complaints series a chance for, say, three or four novels, before finally deciding if you like it or not. One warning: The plot gets exponentially more complicated towards the end, and you will need to know all the characters by heart by then. If you’re a sloppy reader, you’ll fall off the train (of thought) and be lost. I personally think it’s a miracle that everything plays out in a logical and reasonable manner. That’s one quality I’d like to have for myself: Crafting storylines like that, so lifelike. Maybe I even have it in me, I never tried. (My life has, though.)

Also, this is no romantic crime novel, where the protagonist winks at the audience in the end, then rides into the sunset with the supposedly missing swag and the girl. It’s filthy, unfiltered, unfair and on top of it all it’s got Scottish weather, which is like English weather, only more nasty. So this is not for those who like to read cushy stories with no real harm done and poetic justice in the end. I’m just sayin‘. 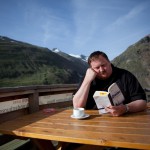 A while ago, I was overnight on a mountain in Austria, at one of those fabled alpine huts (more here), and the only luxury item I took with me (read: decided to shlep, since we were walking) up to those 2413 meters above sea level was The Complaints, which I was reading at the time. That picture of me reading was taken on the next morning, where I found half an hour or so before the hustling and bustling of the 60 or so other people started, and they all hiked on to peaks or other places.

Now I’m finished with the book and hope to see Malcolm Fox again in his next – „adventure“ would be the wrong word – professional dilemma.

PS: I wanted to add a few more pictures of Edinburgh, but I couldn’t find them on my drive. I am actually in a state of hysteria right now, since I’m very, very thorough with digital pictures. The whole trip is gone! I don’t know why! I will keep looking, but if they’re deleted – that would be very bad indeed.

I’m writing this book review in English, because there are some english-speaking folks I want to recommend the book to. Scotsman Ian Rankin writes crime novels, and has been doing...

Go ahead, make my day.

This website uses cookies to improve your experience while you navigate through the website. Out of these, the cookies that are categorized as necessary are stored on your browser as they are essential for the working of basic functionalities of the website. We also use third-party cookies that help us analyze and understand how you use this website. These cookies will be stored in your browser only with your consent. You also have the option to opt-out of these cookies. But opting out of some of these cookies may affect your browsing experience.
Necessary immer aktiv
Necessary cookies are absolutely essential for the website to function properly. This category only includes cookies that ensures basic functionalities and security features of the website. These cookies do not store any personal information.
Non-necessary
Any cookies that may not be particularly necessary for the website to function and is used specifically to collect user personal data via analytics, ads, other embedded contents are termed as non-necessary cookies. It is mandatory to procure user consent prior to running these cookies on your website.
SPEICHERN & AKZEPTIEREN